Ryan Saavedra at the Daily Wire pointed out that yesterday’s conflict of interest is today’s moment of stardom. The New York Times sounded thrilled that the vice president’s college-age stepdaughter signed a contract with a top modeling agency. Vanessa Friedman and Jessica Testa used the words “breakout star”! 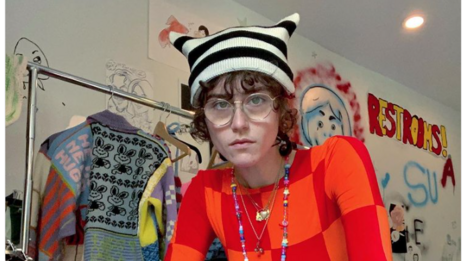 [Inaugural poet] Amanda Gorman is not the only breakout star to have emerged from the inauguration as the fashion world’s latest influencer-in-waiting.

One week after the Miu Miu coat she wore at President Biden’s swearing in went viral, Ella Emhoff, the 21-year-old stepdaughter of Vice President Kamala Harris, became the newest face at IMG Models, one of the world’s most prestigious modeling agencies.

This is the same Vanessa Friedman who was caught maligning Melania Trump as a “hooker.” Four years ago, the Times was touting activists who boycotted Ivanka Trump’s clothing line.

“It’s not really about shape, size or gender any more,” said Ivan Bart, the president of IMG Models, noting that what brands are attracted to, and what consumers want, is authenticity. “Ella communicates this moment in time. There’s a cheekiness and a joy she exudes.”

And, he said, when he saw her at the swearing in, he thought, “Wow, she’s communicating fashion.”

But Bart is communicating politics…and finance. He’s looking for buzz, and he found her at a Harris fundraiser.

Mr. Bart first became aware of Ms. Emhoff’s style at a fund-raiser for Ms. Harris during the presidential primaries. “I noticed her as soon as she walked in the door,” he said. During the summer of 2020, he and Ms. Emhoff began talking about the possibility of her joining IMG. They had a Zoom call, and she showed him her loom and some of her knitwear pieces.

Emhoff is a a senior at Parsons School of Design in New York, a budding fashion designer. As they interviewed her, the Times duo puffed her “style” and her vision. She’s not really a model, she’s “an artist with a creative passion beyond simply being a mannequin — as well as ‘really weird tattoos and kind of a funky haircut.’”

Ms. Emhoff throws a crocheted grenade at the image of typical D.C. political offspring, with a style that could be termed Wes Anderson chic. In her selfies, she doesn’t wear much makeup and doesn’t carefully blow-dry her naturally curly hair. She shows off her armpit hair and cartoonish tattoos, which include eggs and bacon in the shape of a smiley face and a cow.

All this means is that the Times (and the fashion world) are thrilled the Democrats are back, baby:

It also speaks to the fashion world’s growing embrace of the Biden administration, with its focus on diversity and empathy, after four antagonistic years with the Trump administration. In 2016, some designers publicly stated that they would not dress Melania Trump because of her association with her husband’s policies; now they are once again in Washington’s thrall.

A modeling contract (!!) “speaks to the fashion world’s growing embrace of the Biden administration, with its focus on diversity and empathy, after four antagonistic years with the Trump administration.” Please enjoy this press release! https://t.co/Ts8UKNxITI

Your free subscription includes news and specials sent by email in accordance with our trusted Privacy Policy.

I DON’T THINK THERE SHOULD BE ANY DEBATES”: Nancy Pelosi Opposes...

ABOUT US
Contact us: [email protected]
© 2021 - Patriot All American - All Rights Reserved.
MORE STORIES

Democrats' “Plan B” for minimum wage hike appears to be off...